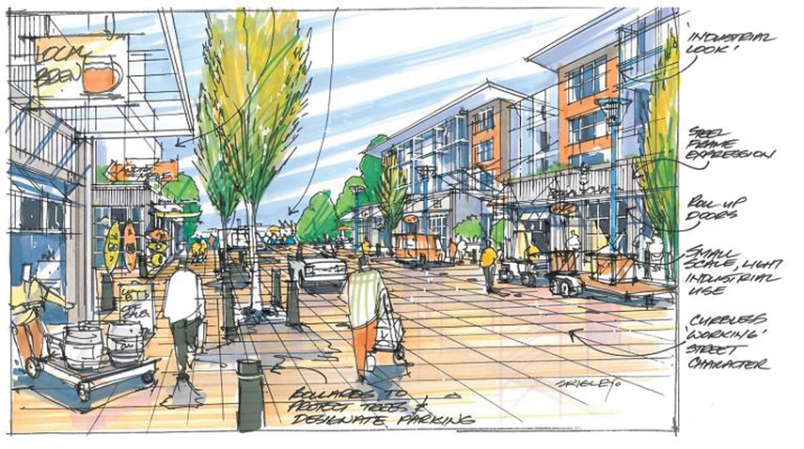 The winds of change may soon be blowing into Maplewood.

District of North Vancouver council is nearing its vote on a plan that will see the 80 hectares of area east of the Seymour River redeveloped over the next 20 years.

Under the district’s 2011 official community plan, 75 to 95 per cent of new development is targeted for the four “village centres.” Plans have already been approved and developments are already underway in Lynn Valley, Lions Gate, and Lynn Creek. Maplewood is the last one in line for “implementation.”

But unlike the other village centres, Maplewood’s is primarily being looked to as a place for jobs, rather than bedrooms. With another 100,000 square feet of commercial space, the expansion of light industrial land and a tech-focused “innovation district,” the plan calls for a net increase of 4,500 jobs in the neighbourhood by 2030.

In that same time period, the plan calls for another 1,500 units of housing, although district intends for much of the housing to be occupied primarily by the people working in the surrounding industry. Most of the area would be low- and mid-rise construction, although there could be towers of up to 12 storeys in the village core.

The district’s intent is to have “complete” walkable communities where people can shop, work, access services and recreate without having to drive.

Since April 2016, district staff have been carrying out public consultations including interviews, community and stakeholder workshops, a design charrette, and public open houses with more than 590 and 655 participants, according to staff’s report.

In broad strokes, the plan has popular support among  people who responded to the survey. Members of council showed varying degrees of support, trepidation and outright disgust with the draft plan presented to them on Monday night.

Concerns raised at the council table echoed many of the concerns listed in staff’s 94-page report on the plan: traffic, displacement of the residents of 250 older, purpose-built rental apartments in the area, the loss of green space, the lack of specifics on how many of the new units would be affordable housing, and the fact that TransLink could not guarantee the neighbourhood would eventually be given B-line bus service, currently scheduled to start operating between Phibbs Exchange and Dundarave in the third quarter of 2019.

Council will be asked whether to give first reading to the Maplewood community plan on Nov. 6, which will trigger a full public hearing.