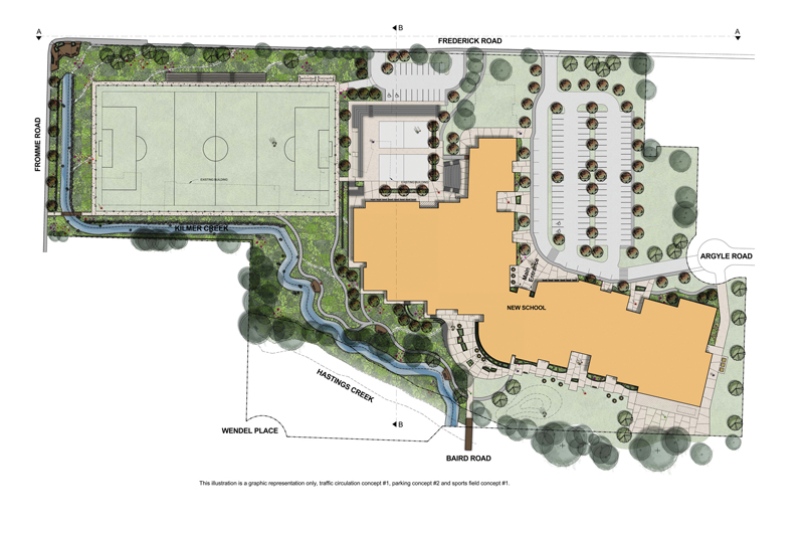 A schematic map shows the location of the new Argyle school and field.

Architects for the $49.1 million rebuild project have had to get creative after funding for the new school fell about $3 million short of what the school district had originally hoped for, meaning some of the non-essential items have had to be dropped or scaled down in the design. Outside washrooms and change rooms for community use have been dropped, but could still be added later, said Mark Pearmain, superintendent of schools for North Vancouver.

Instead of a standalone performance space, the design includes a two-storey atrium/lobby space near the main entrance to the school that can be connected to a drama studio for larger audiences. The design also includes features like movable walls between some classrooms so that classes can be opened up and combined if the situation warrants. There are three smaller gym spaces in the proposed design, including two that can be combined to a championship-sized court, Pearmain added.

Heather Skuse, chairwoman of Argyle’s parent advisory council, attended an information meeting with about 150 other parents and members of the public on Nov. 24. “I think the reaction from the parents was generally pretty good,” she said. “The design of the building is really neat. Everybody understands if we were being given the actual true amount of money we need there would be a lot more options.”

Education Minister Mike Bernier announced in June that a new Argyle secondary school will be built to replace the seismically risky high school. Of the $49.1 million budgeted for the project, $37.7 million is being funded by the province while the school district is providing $11.4 million, money that came from the sale of former Monteray and Keith Lynn school sites.

Skuse said some parents at the meeting voiced concern about how Argyle’s athletics programs will continue during the two-year build without access to a field.

Whether that field is artificial turf or an “all weather” gravel field will depend on whether other funding partners come to the table, said Pearmain. The school district only has enough cash to pay for a gravel field, but school officials are in discussions with the District of North Vancouver about partnering on an artificial turf field, which would be available for community use.

There are also plans for Kilmer Creek, which currently flows in a culvert under the school, to be opened and flowed around the new school field.

The municipality also has a role in determining how much parking is required at the school. Bylaws require 165 parking stalls for Argyle. If the municipality grants a variance, that could be reduced to 110 spaces, making more room for outdoor space, such as a smaller training field for athletes, said Pearmain.

Skuse said personally, she’d prefer less parking and more outdoor space for students. Parents at the school are keen that facilities at the new school are adequate to support the programs currently running at Argyle, she added.

“We have staff that are dedicated to extracurricular (programs),” she said. “There are some amazing programs. As parents, we want them to be supported.”

The public is also being invited to weigh in for different traffic circulation options proposed for the school site.

The school district is accepting public feedback on the plans until Dec. 9.