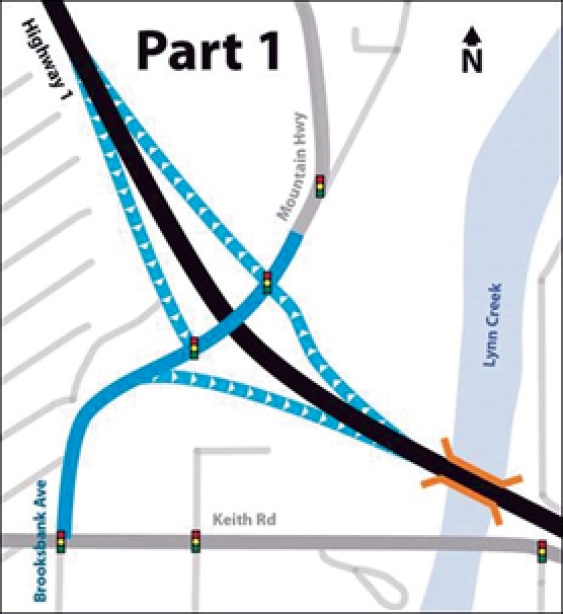 The new interchange will consist of four ramps, a signalized intersection east of the new structure, a new wider structure and the realignment of Mountain Highway to Brooksbank Avenue at Keith Road. graphic supplied Ministry of Transportation and Infrastructure.

District of North Vancouver council members are on board for a planned redesign of the Mountain Highway interchange – on the condition that it can be adapted to include a new, wider Lynn Creek Bridge on Highway 1.

The district’s committee of the whole got its first chance to formally discuss the plan on Monday night.

The province’s design, which has been public for almost a year, includes a five-lane Mountain Highway overpass (up from four lanes in previous iterations) with a new off-ramp from the Cut leading to Brooksbank Avenue, a new on-ramp from Mountain Highway onto the Cut northbound, controlled intersections, and AAA bicycle and pedestrian infrastructure.

But it lacked a direct route onto Highway 1 east for commuters coming from Lynn Valley, something that wouldn’t be possible unless the 1960s-bridge over Lynn Creek is replaced with more lanes.

A new bridge could also accommodate an additional two-lane east-west road linking Mountain Highway to the Seymour area without funneling local drivers in with highway traffic.

The trouble is: there is no guaranteed funding to replace the old orange bridge, although North Vancouver’s new Liberal MP Jonathan Wilkinson promised the feds would chip in if his party formed government.

Construction contracts for the interchange will go to tender in the spring with work lasting between the summer of 2016 and 2018. Council is likely to hear from the province and feds about whether the new Lynn Creek bridge portion of the plan is workable in early 2016.

“It makes absolutely no sense if we’re not going to go ahead with this new bridge,” said Coun. Lisa Muri.

Despite being clearly fed up with congestion as it is now, council members are by no means convinced the interchange projects would be the silver bullet to the North Shore’s traffic woes.

Other regions that have tried to build their way out of traffic have found, at best, temporary relief, several on council noted.

“The traffic out in the Fraser Valley is incredible. There are eight lanes and they’re all full up, all the time. I don’t think we’re going to be able to do anything about beating traffic. The more you widen the roads, the more traffic will come,” said Coun. Robin Hicks.

Instead, Hicks and others on council argued cities need to address the growing demand for road space at peak times. Canada’s Ecofiscal Commission released a report last week saying the best way to do that was through road pricing, a system that levies vehicle owners by how much they drive and on what times.

“You’ve got to have some kind of demand management or better public transit but those are provincial jurisdiction and they don’t seem to want to it. It will upset the voting populace,” he said.