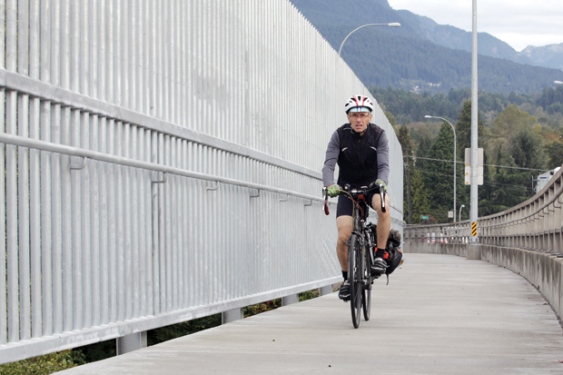 After months of construction and restricted access, the $20-million project to widen the sidewalks and install suicide prevention fences on the Ironworkers Memorial Second Narrows Crossing is finally done.

The Ministry of Transportation and Infrastructure opened the gates on the west sidewalk just in time for the evening rush hour Thursday.

North Vancouver-Seymour MLA Jane Thornthwaite said completing the project is a step towards one of the main goals she had when entering provincial politics in 2009 — resolving the transportation issues that plague the bridgehead and Seymour area.

“I’ve been lobbying for lots of changes, not just the bridge safety issue, but also the on-ramps and off-ramps and the whole transportation infrastructure project that we got approval for earlier this year,” she said. “I think safety is one of the key issues that prevents people from actually getting on a bike. If we can make the cycling infrastructure safer for people, then they will be more encouraged to get on a bike and then that would obviously alleviate one extra car on the road,” she said.

The new 2.5-metre sidewalks are a “fantastic” improvement over the old, narrow bumpy ones, said Tony Valente, HUB spokesman.

“I’ve been cycling across that bridge now since 2009… and it was rough. It just wasn’t safe,” he said.