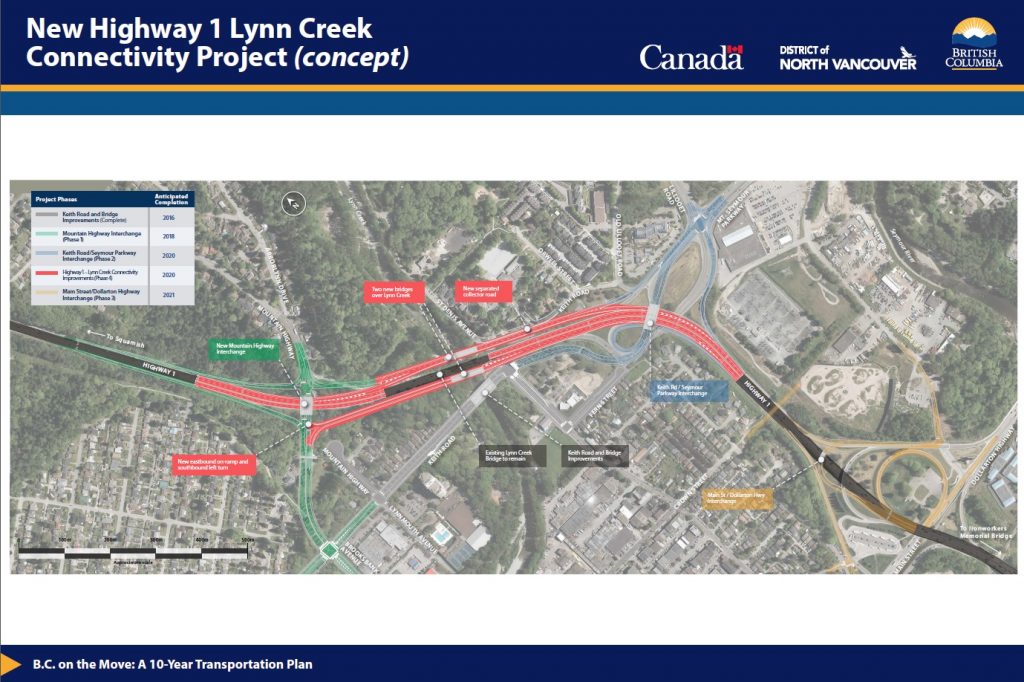 Lower Lynn Project has been expanded to include direct access to the highway for Lynn Valley residents and a separate east-west connection between Seymour and Lynn Valley!

Plans to alleviate traffic on the Cut and Ironworkers Memorial Second Narrows Crossing got a big boost Friday with the announcement of two new two-lane bridges over Lynn Creek shouldering the existing orange Highway 1 bridge.

The $60-million project announced Friday expands on the already-in-progress Mountain Highway interchange redesign. Costs of the project will be shared equally by federal, provincial and District of North Vancouver taxpayers.

When the project is complete, which is targeted for 2021, the Cut will be divided into express and collector lanes, similar to what’s used at the Port Mann Bridge now, with local east- and westbound traffic crossing the new bridges.

The design is meant to physically separate east-west traffic trying to get across the North Shore from traffic bound for the Ironworkers. It will also mean less weaving and merging of vehicles at multiple entry points on the highway, which creates inefficiencies.

The total cost of the project is now nearly $200 million.

North Vancouver Seymour MLA Jane Thornthwaite described the project Friday as “one of the most complicated infrastructure projects in the province today” and one that’s critical to the North Shore. “Since 2009, this has been the number one issue I’ve been working on,” she said.

“We’ve been stuck in this forever and we’re finally going to fix it.”

Thornthwaite said the lower Lynn corridor is currently a choke point for the entire region – both for people driving from Horseshoe Bay to Burnaby and those going from shopping to soccer practice within North Vancouver.

“I live here and I know how busy Highway 1 can get,” she said “I’ve been stuck in traffic for hours.”

North Vancouver MP Jonathan Wilkinson described the project announcement as “very good news for all of us.”

He added he’d raised the issue of the significant bottleneck in the area and promised a Liberal government would fix it during the 2015 federal election.

The new express/collector distribution system will be an adjustment at first, with a few people likely getting caught in the express lanes and missing their desired exit, said Gavin Joyce, the District of North Vancouver’s general manager of engineering.

“You have to make that decision early,” he said. “You’ll get used to it pretty quickly if you live on the North Shore.”

According to traffic studies, about 20 per cent of the drivers on the Cut during the evening rush hour are exiting before the bridge.

Part of the $20 million going towards the project from District of North Vancouver taxes will go towards the purchase or expropriation of private land on the north side of the existing bridge, and more trees will have to be removed from Bridgman Park to accommodate the new bridges.

There had been talk of replacing the orange 1960 Highway 1 bridge over Lynn Creek, but the structure has at least another 15 years of life left in it.

Compared to previous iterations, the concept unveiled Friday adds the ability for Mountain Highway drivers to get on Highway 1 eastbound, though it does not offer a way for drivers exiting the Cut at the new interchange to turn north onto Mountain Highway.

Eventually, the province will also look to totally revamp the Main Street/Dollarton Highway interchange as well, although what that might look like hasn’t even been put on paper yet.

According to a provincial traffic study, the Ironworkers Bridge itself is almost at capacity now. In theory, the bridge can handle 1,800 vehicles per lane, per hour heading eastbound. But the bridge already accommodates more than 5,000 vehicles per hour in its three eastbound lanes during peak periods.

Seymour North Burnaby MP Terry Beech acknowledged Friday’s announcement won’t eliminate traffic congestion on the North Shore. “It’s not the only solution to solving our traffic problems,” he said, adding housing affordability and transit also play key roles. “All of these issues affect traffic and they affect each other,” he said.

District of North Vancouver Mayor Richard Walton said while “the future isn’t just in building roads and highways … you have to invest in your infrastructure.”

Walton said the project will make a difference to traffic congestion on the North Shore.

“You’re always going to have to spend some money on roads,” he said. “There’s a huge amount of lost productivity with people sitting in traffic.”