In 2014, Consumer Demand For Housing in BC Strongest in Five Years 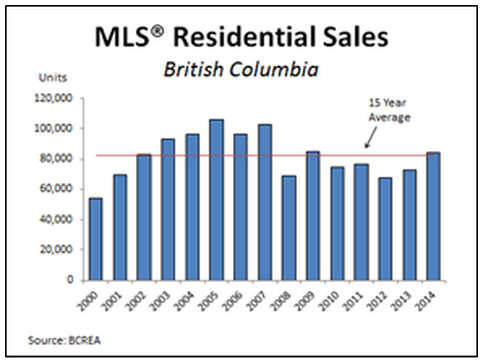 “BC experienced a significant increase in housing demand last year,” said Cameron Muir, BCREA Chief Economist. “Not since the post-recession rebound of
2009 has the market posted such a turn around.” Prior to 2009, one would need to look back to the 2001-2002 period to find a stronger year-over-year percentage gain in BC home sales.

Home buyers were out in force in nearly every region of the province, with unit sales climbing 8 to 25 per cent in all BC real estate boards, except Kamloops where the number of transactions dipped nearly 5 per cent. “Stronger consumer demand not only pulled down the inventory of homes for sale, but also firmed market conditions throughout the province,” added Muir.