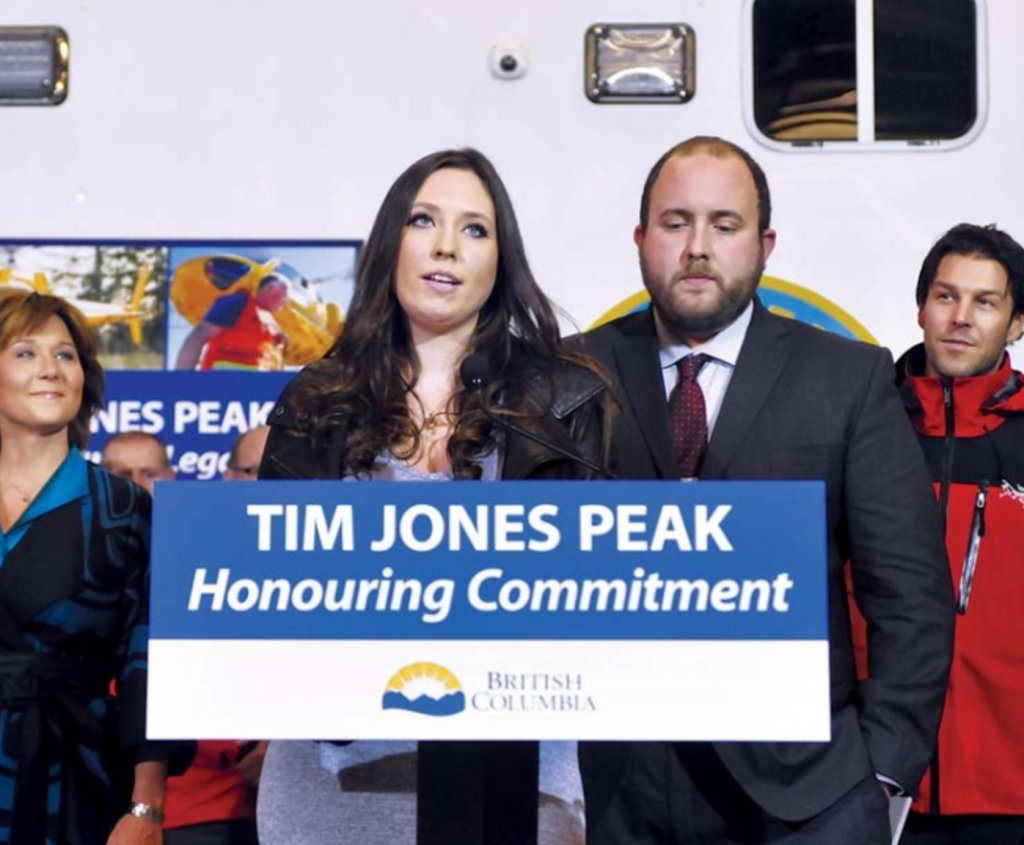 Taylor and Curtis Jones address the media and gathered dignitaries on the official naming of Tim Jones Peak.

Taylor Jones will be reminded of her father — the longtime leader of North Shore Rescue who died in 2014 — whenever she hikes a North Shore peak that will bear his name.

“To this day, we feel he’s always with us in the mountains,” she said at a news conference with Premier Christy Clark in North Vancouver on Friday night.

“We’re so thankful for this recognition. Our family will hike and ski-tour to Tim Jones Peak regularly… and be reminded of how lucky we were to spend part of our lives with such a caring, compassionate and adventurous father.”

The province will introduce legislation in March to rename one of Mount Seymour’s peaks to Tim Jones Peak in honour of Jones, who died after collapsing on that mountain, Clark said.

Jones’s son Curtis, also a longtime member of North Shore Rescue, called his father a “mountain” of a man.

“Not particularly tall, but a presence when he walked into a room. He’d be unbelievably proud of this honour. This will have a profound impact on us as a family. He is now immortalized on a mountain he loved.

“We lost a real B.C. hero in Tim Jones,” Clark said. “The wilderness Tim Jones loved so much will bear his name forever.”

Mike Danks, who succeeded Jones as leader of the rescue team, called it an “incredibly fitting tribute.”

“He was a mentor to me and to so many others on our team. He took us from a two-car garage to a state-of-the-art rescue base. Renaming the peak keeps Tim’s legacy alive.

The peak is known as Second Pump Peak, although that name was never officially adopted. The 1,425-metre peak is within the boundaries of Mount Seymour Provincial Park.

Tim Jones was an advanced life support paramedic and unit chief with the B.C. Ambulance Service and team leader with the volunteer North Shore Rescue for many years.

Born in Edmonton, his family moved to North Vancouver when he was six years old. He spent the rest of his childhood exploring the local mountains.

Jones, the 57-year-old leader, face and voice of the 40-member North Shore Rescue — among the busiest such teams in Canada — died on his way down from the team’s cabin on Mount Seymour. Jones was walking with Taylor, who tried to resuscitate him, and paramedics, firefighters and police were also unable to revive him. Jones was later pronounced dead at Lions Gate Hospital.

Jones was widely respected for the many contributions he made to the volunteer component of search and rescue activities and to outdoor safety projects and programs in B.C.

He was instrumental in helping North Shore Rescue become the first search and rescue team in B.C. to adopt helicopter longline rescue techniques.

In 2014, the federal government recognized Jones by establishing a national search and rescue tax credit in his name.

In recognition of his pioneering work, Jones was presented with the Order of British Columbia, a Queens Diamond Jubilee Medal and an honorary doctorate from Capilano University.

North Vancouver-Seymour MLA Jane Thornthwaite said Jones was a friend who she misses every day. “Tim Jones’s legacy on the North Shore and in British Columbia is legendary and I am proud to stand with his family and give him this honour.”

Gilles Valade, executive director of Avalanche Canada, said Jones “dedicated his life to public service and to safeguarding the lives of people venturing into the mountains that he knew so well.”