Why North Shore residents are the region’s happiest 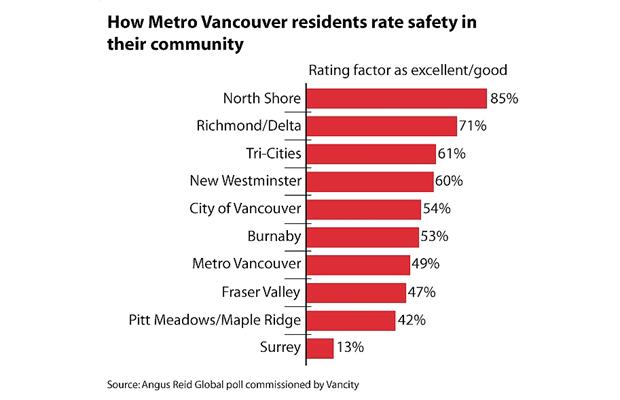 Safety, easy access to the great outdoors and the city make it great place to live, but high housing costs a worry

METRO VANCOUVER – From where he lives in North Vancouver, Gordon White can be kayaking in the Capilano River in five minutes, rock climbing in Squamish in under an hour or kicking back at a wine bar in downtown Vancouver in half an hour or less.

The North Shore’s proximity to both the great outdoors and the cultural amenities of a big city are among the reasons its residents are among the happiest in the region, according to the results of a poll conducted by Angus Reid Global.

Most North Shore residents (89 per cent) rated the area as an excellent or good place to live, roughly on par with other Metro Vancouver municipalities, with marked exception of Surrey, at 64 per cent.

However, those on the North Shore were significantly more enthusiastic in their endorsement, with more than half (54 per cent), rating the area as an excellent place to live, well above the regional average of 33 per cent.

Part of the reason could be that the two factors North Shore residents gave highest marks for — safety of the community and as a good place to raise children — were also the measures that proved to be key determinants of satisfaction for all respondents, with economic and geographic factors taking a back seat.

On safety in particular, a remarkable 85 per cent of residents rated the North Shore as excellent or good, compared with a regional average of 49 per cent and a low of 13 per cent in Surrey.

The North Shore has held on to something of a small-town feeling, especially in places like Edgemont Village, said Hirst, who said she enjoys running into people she knows while out and about. Access to green space, parks and outdoor recreation is also important to Hirst, who bikes to work and hits the ski hills in the winter. The North Shore received the highest score in the region on this measure as well.

White moved to the North Shore primarily because of the easy access to outdoor recreation. He is an avid kayaker, rock climber, backcountry enthusiast and skier.

“It’s a slower pace in North Van. … It was like moving to a small town in some ways after the hustle, bustle, sort of faster more trendy Kitsilano,” he said. “You go to North Van and it’s like, wow. People are just so much more relaxed and friendly.”