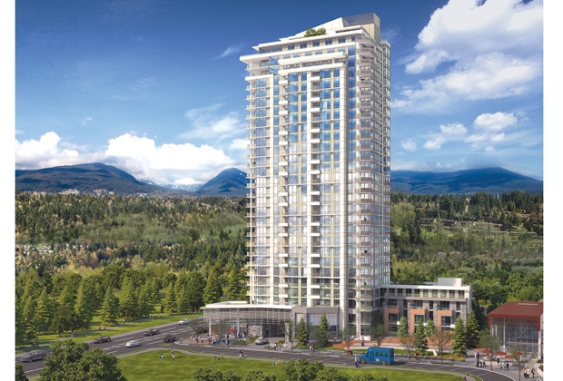 North Vancouver District council gave the go-ahead for work to begin on the second phase of the Seylynn Village project April 27; but plans to hang large advertising signs from the building prompted council debate.

The project site, located at Fern Street and Mountain Highway, recently completed its first of three towers, which will start seeing people move in this summer.

Phase two of the project will see the construction of a second 28-storey residential tower and a six-storey building consisting of rental units as well as a child-care facility and attached recreation space.

Along with building permits for the next phase, developers came to council April 27 seeking a variance to sign bylaw regulations. Part of that would allow for large banners advertising units for sale to hang down from the project’s three towers until shortly after completion, sometime in 2017.  Not all councillors thought that was a good idea.

“I’m disappointed that we’re asking for a variance,” said Coun. Lisa Muri, who said the district has received a number of complaints about the amount of advertising the project has been displaying in recent months, particularly in regards to the falling banners in place until recently on the newly completed Beacon tower.  “I appreciate the banners that go around the outside, but this is not temporary; these buildings have many years before full build-out is complete.”

Despite being in support of Seylynn Village, Muri urged council to reduce the amount of advertising and not allow the banners at all.

“To have banners that fall from three towers vertically is just a little bit overkill in my opinion and I really hope that council would consider omitting those.”

Mayor Richard Walton was also in support of the project but echoed Muri’s concerns about the banners being allowed to hang from the towers. He said he liked the design of the “Phase 1” tower and that by “putting an advertising banner on it for the next couple years, I just think achieves exactly the opposite of what you’re trying to achieve.”

Coun. Roger Bassam suggested allowing the buildings under construction to sport banners until completion as a compromise to the request, a time period of approximately eight months.

“I think that’s a reasonable compromise, to say you can put a banner on a building that is under construction,” said Bassam.

In the end, council voted in favour of granting the permits for Phase 2 but requested further discussion on the issue of Seylynn’s advertising at an upcoming council meeting.