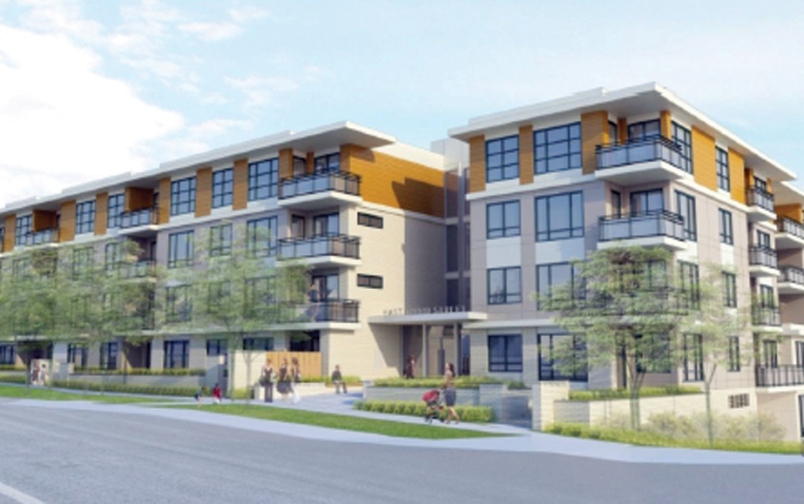 If approved by City of North Vancouver council, the 157-unit residential development proposed by Qualex-Landmark and marketed as Green on Queensbury would span an entire city block adjacent to Moodyville Park.

Looks still matter in this world, even for apartment buildings.

The first major development proposal of the new Moodyville, which came before City of North Vancouver council on Monday, spreads 157 apartment and townhouse units over three four-storey buildings on East Third Street. But while the project would expand Moodyville Park and diminish the city’s heritage registry, the major stumbling block for Coun. Linda Buchanan was the project’s esthetics.

“For lack of a better word, they’re just a bit plain and a bit vanilla,” she said, urging the developer to infuse the design with “more character and spunk or funk.”

The project also elicited concerns from the Advisory Design Panel. In a split vote in October, the panel requested the project break up its massing, display greater innovation, and offer a nod to the history of Moodyville in creating a less ubiquitous, more site-specific design.

The building’s design includes metal and brick accents and steps down from four storeys with two-storey townhouses facing Moodyville Park.

The applicant has incorporated contemporary materials and more colour into the project since the design panel’s October rebuke, according to city planner Michael Epp, who suggested the developer “met the (panel’s) intent.”

City council voted on a massive rezoning for the portside neighbourhood in May 2016, which is expected to quadruple the population below Third Street.

“I think it will set the tone, to some degree, for what happens elsewhere, so I think it’s important we get it right,” said Coun. Don Bell of the project. Bell used the word “mundane” in describing the appearance of the development.

“My caution would be to them: think about it now, if you don’t want to run the risk of having us say at the end of the public hearing: ‘We want you to go back and change your design.’”

“Both small homes are surviving examples of the standardized style of wartime housing,” noted a city staff report.

Despite being built on concrete blocks with the intention it would serve as temporary living quarters, the house at 749 East Third St. has its original windows, according to the city’s heritage registry.

Just down the block, the Rushede Residence was first occupied by a Burrard Dry Dock Co. worker.

If the project is approved, the heritage homes would be demolished. The developer is willing to commit $35,000 toward a commemoration project, according to a staff report.

The developer had “indicated a willingness” to pay to move the houses but no viable site could be found, according to a staff report.

The project also includes a swap between the city and Qualex-Landmark, with the developer providing land on the 800 block of East Third Street to the city in exchange for an equal amount of city-owned land to the east and south of the 700 block.

The city would use the land to expand Moodyville Park by 25,000 square feet while closing the lane to the south of the 700 block and the road at the foot of Queensbury Avenue.

If the project is approved, the city will embark on a $2.5-million “revitalization” of Moodyville Park, funded with the developer’s $4.2-million community benefit contribution.

The public hearing is slated for March 27.