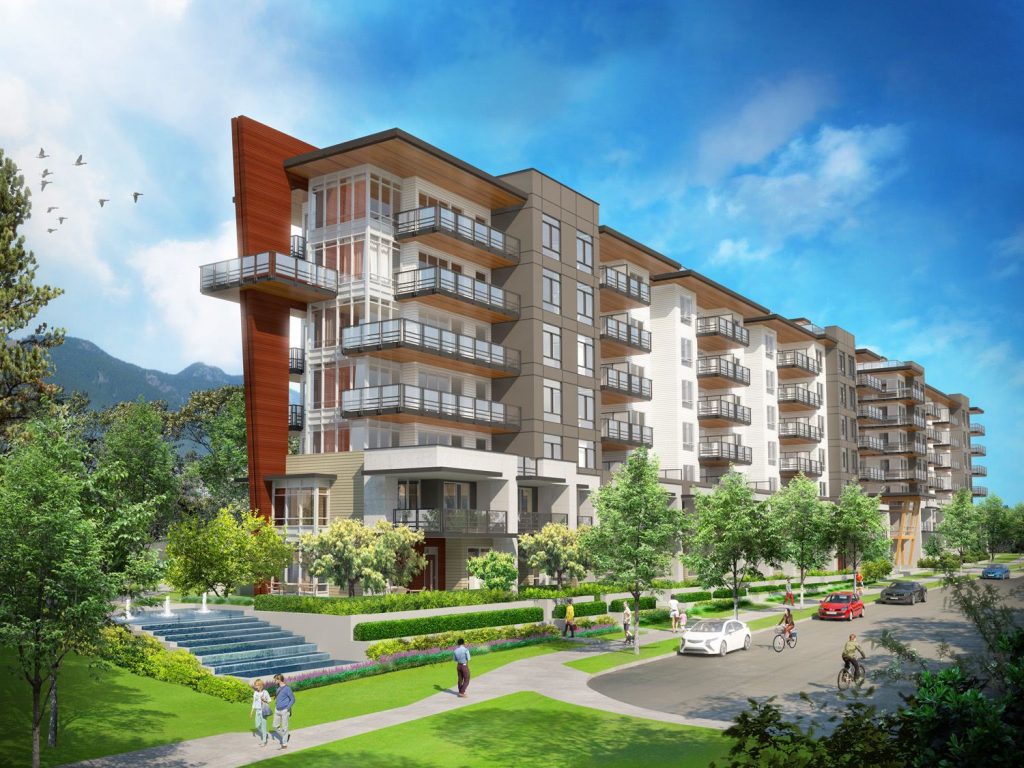 A design rendering of the 179-unit residential development at 150 East Eighth St. as it will look upon completion.

Despite neighbourhood outcry over a shortage of parking and an excess of density, four out of seven councillors favoured construction of two six-storey buildings as well as 17 ground-floor townhomes.

The site resembles a right-angle triangle with the longer sides running along East 11th and Eighth streets and the point jutting towards Lonsdale Avenue.

The project’s mass and height will leave neighbours “dwarfed” while failing to provide housing the city needs, Hayes argued.

“This is a market condo building, not affordable housing,” she said.

“We’re seeing a changing demographic on the North Shore that is worrying to me,” he said. “We’re seeing people being driven away because of economics,” he said.

Mayor Darrell Mussatto conceded that developer Crest Adera will sell the units for “as much as they can,” but he countered that the project is still more affordable than buying a single-family home.

The project is near the 229 and 230 bus routes, close to shops, and a quick hop from the Green Necklace cycling route.

The city’s guidelines allow a maximum of six storeys on the site – measured from the highest point of the lot. Those parameters limit floor space ratio – which measures the project’s total floor area against its lot size – to 2.6, which includes a 1.0 FSR bonus.

That money “can go right to Harry Jerome,” Mussatto said, noting the high cost of the forthcoming recreation centre.

“I don’t want cash in lieu,” he said. “I want the affordable housing units.”

The project’s preliminary application included 12 units at below-market rates. That component was scrapped.

The project includes 235 parking spots, including 30 spaces for Telus employees who will work in the building on the eastern side of the site.

The extra density will exacerbate a parking scarcity that has sent many customers into the large parking lots around Park Royal in West Vancouver, said Coun. Pam Bookham.

“We’ve been hearing a lot from our business owners about the challenges of providing adequate street parking for their customers,” she said, mentioning the challenges faced by customers at the Club 16 fitness centre on Lonsdale.

If North Vancouver wants to support a small business community, as opposed to a mall, “we need more people,” Coun. Linda Buchanan argued.

The market development is essential for North Vancouverites who want to own rather than rent, she said.

Coun. Holly Back praised the developer for providing ample parking and an off-leash dog park.

“I don’t see how this six-storey building is going to overshadow anything,” she said. “The Telus building has been pretty ugly there for the last 50 years so thank you for beautifying the area.”

While housing prices have risen amid an “unprecedented building boom,” Coun. Craig Keating reminded the packed chamber about the delicate nature of council’s responsibilities.

“I would not sit here in front of council and say, ‘I’m the councillor who’s going to help everybody’s housing prices go down,’ because if you own the house you don’t like that idea,” he said, adding that it’s a different matter for residents hoping to buy homes.

The project should, “help us replace the single-family home,” he said.

Council’s decision was supported by Philip Tarrant, who described himself as a millennial in support of density.

“Density is the only way my generation can afford to live and buy homes on the North Shore,” he said. “Adera will take an under-utilized property in a great location and turn it into 179 new homes.”

Crest Adera is also on the hook for $635,000 worth of in-kind contributions, including a dog park facilitated by moving the cul-de-sac eastward, public art, and the relocation of the grizzly bear sculpture on Lonsdale Avenue and Eighth Street.