Home prices jumped 40 per cent in Vancouver. Where are all the cranes? 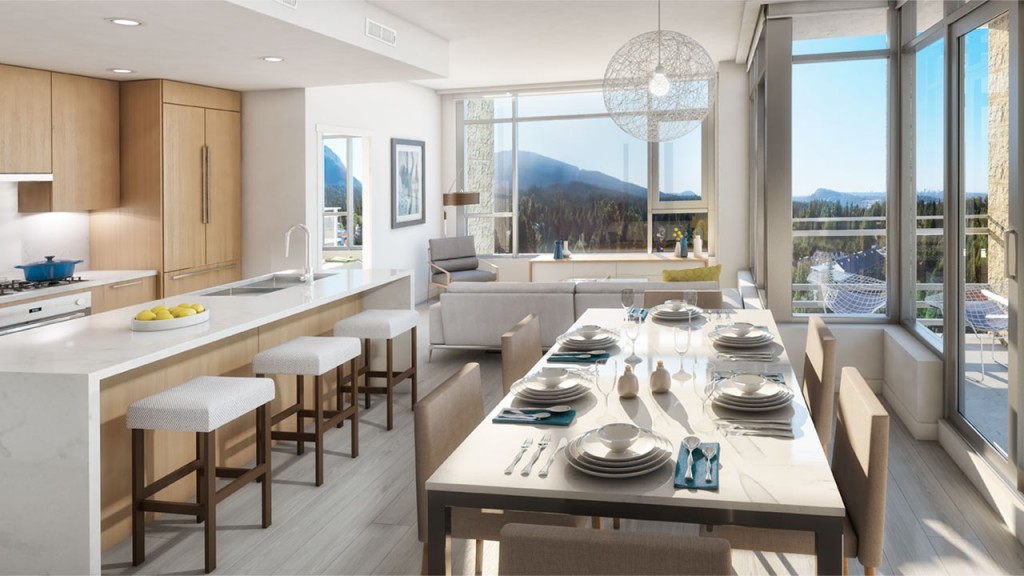 The Residences at Lynn Valley by Bosa Development.

When something becomes more expensive, people will produce more of it. According to that pillar of Econ 101, new homes should be springing up all over Vancouver. Which they aren’t.

The property market on Canada’s West Coast is one of the world’s hottest, or most unhinged, depending on your perspective. From local tech whizzkids to wealthy Chinese scouting for safe havens and investors just seeking returns on a quick flip, demand for Vancouver houses seems endless. Meanwhile, thanks to strict land-use rules and lobbying by existing homeowners, supply has stalled.

“When you have a 40-per-cent increase in prices in a year, the skyline should be absolutely saturated with cranes,” said Thomas Davidoff, head of the University of British Columbia’s Centre for Urban Economics and Real Estate. “That’s not what you see in Vancouver.”

What you see instead is the shortest list of houses for sale in almost a decade, even as the price of a typical single-family house surged to $1.5-million, about 20 times what the median household earns in a year.

Vancouver isn’t the only place in the world, or even in Canada, where house prices have soared beyond the reach of residents: It’s happening in the global economy’s poster-towns, such as London and San Francisco, and in less-feted Auckland, Stockholm and Toronto, too. A common thread that links such cities is curbs on the availability of land for building. Yet as the Vancouver boom turned into a crisis of affordability, and authorities moved to tackle the problem, housing supply wasn’t the direction they were looking.

In August, the province of British Columbia imposed a 15-per-cent tax on foreign buyers, and in October, the federal government tightened rules on mortgage eligibility. Those steps had some success in cooling the market – but not in a good way, according to Cameron Muir, chief economist at the British Columbia Real Estate Association. That’s because measures aimed at capping demand also send a signal to developers and builders to slow down, he said. “Addressing the supply side is not only beneficial for housing affordability in the long term, but it adds these great things called jobs in the economy, and growth,” Mr. Muir said. “Weakness in demand is not that helpful. If home prices don’t rise as rapidly because you can’t afford to buy a home, would you call that an increase in affordability?”

Toronto is also struggling with housing supply: The number of low-rise homes built last year in Canada’s financial hub was the lowest since 1995. The city is encircled by a green belt of almost two million acres that’s under permanent protection, and has experienced a price run-up similar to, though not as steep as, the one in Vancouver.

In fairness to those in charge of planning for Vancouver and Toronto, they must be doing something right. Both cities are consistently ranked among the most world’s most livable, even if such lists sometimes skate over the question of affordability. Building curbs help to contain urban sprawl and promote greener development. In Vancouver’s case, there are physical constraints, too: It’s encircled by water and soaring mountains.

Still, an unchecked real estate boom risks turning it from a working city into a playground for tourists and the wealthy elite – a “lifestyle bubble,” as consultant Deloitte Monitor warned in a study for Vancouver’s port authority last year.

A shortage of land is an odd predicament for Canada, the world’s second-largest country and one of the least densely populated. Of course, space is scarcer in the Toronto and Vancouver metropolitan areas, home to nearly a quarter of the 35-million population. Still, local rules exacerbate the problem.

Almost a quarter of Metro Vancouver’s land base is set aside for agricultural use. When The Globe and Mail investigated such plots last month, it found many of them occupied by luxury mansions whose owners benefit from tax breaks meant for farmers. The Ministry of Community, Sport and Cultural Development, which oversees property assessments, said in an e-mail that it’s “carefully reviewing the report” and wants to “ensure that our policies support the goal of encouraging farming on agricultural land.”

In the areas that are available for housing, strict zoning applies. About 65 per cent of Vancouver is designated primarily for single-family houses, according to Anne McMullin, president of the Urban Development Institute. Anyone driving into the city probably won’t see much high-rise until they get near the central business district.

Vancouver has only about half as many people per square kilometre as Barcelona, according to data from Demographia, yet despite their increasingly long commutes its residents vehemently oppose condominium developments. Last year, they voted down a $7.5-billion public transit plan that would have led to greater densification.

What few residential high-rise buildings there are mostly contain the tiny one and two-bedroom apartments favoured by investors – many of whom don’t live in them.

An estimated 20,000 homes in the city are believed to remain vacant throughout most of the year, lights out and shades down, prompting Mayor Gregor Robertson to announce a new tax on absentee landlords starting January.

Family-friendly townhouses and three-bedroom apartments are “like unicorns” because developers have zero incentive to build them, UBC’s Mr. Davidoff said.

It can take years to get rezoning agreements for a major project, and the red tape adds about 20 per cent to final costs, according to the Urban Development Institute. “In every jurisdiction, the approvals are taking longer,” said Brian McCauley, president of Concert Properties Ltd., which builds in both Vancouver and Toronto. “You’re bumping up against existing communities where there is a fear of change. There is a political reality of nimbyism.”

Last year, the owner of a typical single-family house in Vancouver watched their net worth grow by more than $1,000 a day. If it’s their primary residence, homeowners don’t get taxed on the gains. It all adds up to a market that’s “essentially rigged,” said Wendell Cox, a senior fellow at the Frontier Centre for Public Policy who’s surveyed housing affordability around the world for more than a decade. “It’s structured so that house prices go up.”