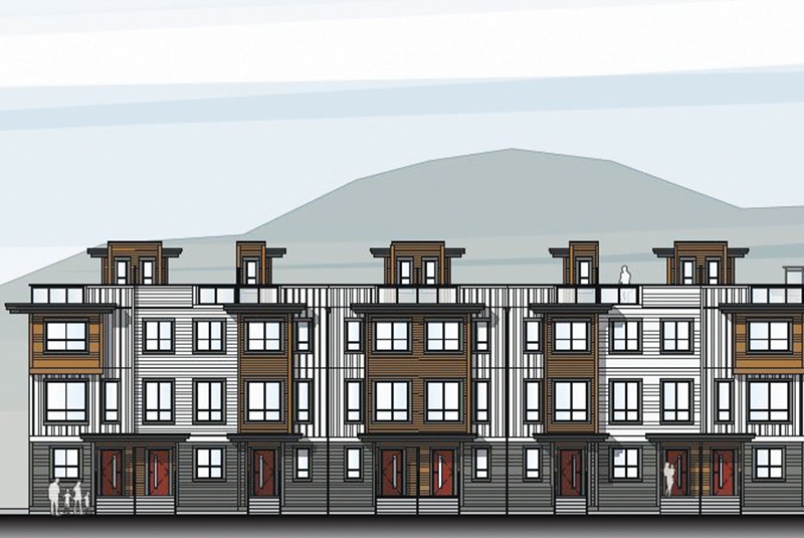 Above is a sketch of the proposed 72-unit townhouse development planned for Government Road.

A proposed 72-unit townhouse complex planned for Government Road will have rooftop decks to save space and may have a car share program.

Squamish’s Target Homes has applied for a rezoning from residential to multiple-unit residential to make way for the “Breeze” development in the North Yards between Edgewater Drive and No Name Road.

About a dozen people attended Target Homes’ presentation at the Sea to Sky Hotel on Nov. 18.

The units will be about 30 feet tall and have rooftop decks, a first for a Squamish townhouse development, Ransier said. The units will also have balconies just large enough for a barbecue, two chairs and a table. There will be an 8,000-square-foot common courtyard, but no individual yards, he said.

The North Yards area doesn’t have enough density yet to support a local shopping plaza, he said, but might with more development. “A couple hundred more homes and it hits that threshold.”

Ransier said a few concerns expressed by neighbours were increased traffic and parking.

He said while Government Road will become busier with the development, the road isn’t at capacity.

“In the long term, as Squamish develops, the district’s goal is for Government Road to realign and go into the industrial park,” he said. “The North Yards won’t be the main thoroughfare.”

Regarding parking, Ransier said a common concern in Squamish is people using their garages for storage and then parking throughout the complex.

There will not be any on-street parking in front of the Breeze development, Ransier

said. “It is not like there will be a lot of congestion in front of our properties.”

Each unit will have enough room for two cars, and every four units will have a visitor parking spot, he said. “They will be forced to park on site or not have a car at all.”

The company is also looking at having a car share co-op option so that parking and traffic congestion would not be issues.

If all goes according to plan, the development will be under construction in late spring or early summer.

The proposal has yet to go before council, and the date of a public hearing on the development has not yet been announced.