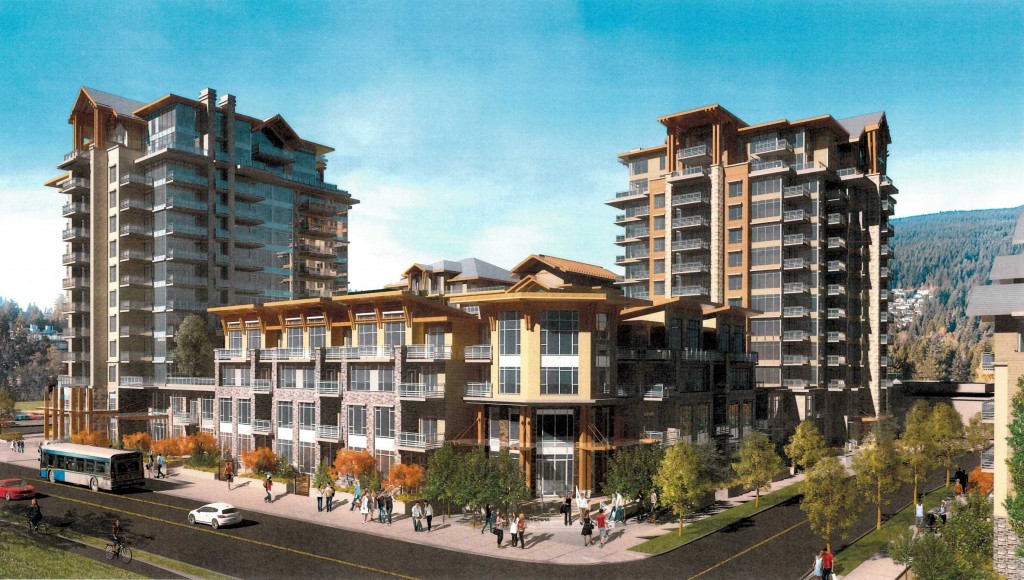 The Residences at Lynn Valley will start sales November 2015.

After years of will they or won’t they intrigue, council unanimously moved to redevelop Lynn Valley mall Tuesday.

Council’s decision to approve the 377 condominium units and 22 townhouses that comprise Bosa’s project was met with a round of applause.

The old Zellers will be traded for two new 12-storey, 150-foot towers.

The two towers will flank four smaller buildings between five and eight storeys perched on a onestorey commercial podium. That podium – most of which will be used for a grocery store – totals 50,000 square feet of commercial space.

The development will lead to a “new, invigorated Lynn Valley,” according to Coun. Robin Hicks, who emphasized the district’s need of more affordable housing.

“If we don’t provide more average-priced housing – and I won’t say this is cheaper housing – we will become an enclave of the more affluent like most of West Vancouver.”

Coun. Lisa Muri praised the project as a compromise that will benefit the community but she also questioned its affordability.

The district can manage development but not halt it, according to Hicks.

“We cannot stop the influx of new families without undesirable economic and financial consequences,” he said.

While allowing that the project has merit, frequent council watcher Hazen Colbert derided the meeting as “a love-in,” bereft of discussion or debate.

“All that was missing was district council and staff holding hands while singing ‘Kumbaya,'” he stated.

The average age in the District of North Vancouver increases by one year every two years, according to Mayor Richard Walton.

“In the past 40 years, 11 schools in North Vancouver have closed,” he said. “We’re still getting older.”

The “lost generation” of young people in North Vancouver signals the need for new homes with lower land values, according to Walton. “This means more density,” he said.

Density is a welcome alternative to watching houses creep up the mountainside, according to many of the project’s supporters.

The development has a floor space ratio of 2.36, which measures the project’s total floor space against the area of the lot. The district’s maximum allowable FSR for the site is 3.5.

Many of the development’s detractors pointed to growing gridlock, attributing traffic jams to the unprecedented development sweeping the North Shore.

The traffic volume on Highway 1 will continue to increase, according to Hicks.

“The traffic increase will appear with or without new development of our town centres,” he said.

Unfortunately, TransLink doesn’t anticipate demand, according to Coun. Alan Nixon. “Once the demand materializes and makes itself known, we will see dramatic changes in the way buses service Lynn Valley,” he said.

Coun. Doug MacKay-Dunn said North Vancouver should be well served by transit, considering that Mayor Walton serves as chairman of TransLink’s Mayors’ Council. “I’m sure that the mayor will look after our interests,” MacKay-Dunn said.

“Those whose views will be obstructed objected to the proposal. I’m sorry I can’t guarantee your view,” MacKay-Dunn said.

Very few residents object to the nearby 17-storey Kiwanis building, according to Coun. Mike Little.

“Heights notwithstanding, there were a lot of people who came in and said, ‘Well it looks a lot better than I thought it was going to look,'” he said.

The development’s timber and stone buildings as well as its three plazas totalling more than 15,000 square feet won acclaim from many in the community.

The neighbourhood is a good example of crime prevention through design, according to Mackay-Dunn, a former Vancouver Police Department officer. “You increase the eyes on the street – you reduce crime,” he said.

“I’m not sure that they have to go through this kind of an effort anywhere else in the Lower Mainland,” he said. “Thank you guys for doing it North Van style.”

Nixon, who has stated he has no plans to stand for office this fall, complimented his colleagues for their political courage.

Council will potentially face an electorate “who may not be too happy with this decision,” he said.

Muri, who has repeatedly called on her colleagues to slow the pace of development, asked for assurances the development will be well managed.

“We recognize that the community is not going to be supportive of further development unless we can manage the development that we’re approving right now,” said Chief Administrative Officer David Stuart. “We’ll do everything to make sure we can manage this.”

The project includes six units of affordable rental housing to be operated by a non-profit society. Each unit is slated to be sold at approximately $150,000 below market value.

Bosa is on the hook for $4.5 million in district amenities, including $1.6 million in transportation improvements, $500,000 for public art, and other money for trail improvements.

CLICK HERE TO CONTRACT CHRIS FOR MORE INFORMATION ON THE RESIDENCES AT LYNN VALLEY INCLUDING FLOOR PLANS, PRICING AND AVAILABILITY.